The Adventuress at the heart shape lake called Lake Emfotte

Arriving at Sentani Airport early in the morning was the right time for me to start the day for another exploration and a taste of adventure in Papua. When I travel, I always love to know about my destinations topography.  I feel that by knowing it, I have little by little learn what our world looks like. The weather was good although the sky was a little bit of grey. I hope during my adventure here it will give me a result of good photographs.

To the Lake Emfotte it is!!! A destination that our guide named Andre Liem offered us to go and have a visit to the heart shape lake after we have a quick peek at the Khalkote Beach in Lake Sentani.
The Lake Sentani is unbelievable! It consists of 21 islands inside it, some are inhabited by the locals and some are not. The lake of more than 9000 hectares has fresh blue water like the sea and lush green hills surrounding it. The Cycloops Mountain Range also known as Dafonsoro or Dobonsolo Mountain in local Sentani language sits beautifully at the North Lake looking green, healthy and elegant.  As ‘Home of Rainbows’, this lake is the largest lake in Papua.
Me and my travelling friends enjoyed the scenic beauty. It was only around 20 minutes’ drive from Sentani Airport to the Lake Sentani. We then continued our journey towards Lake Emfotte. To be honest, I was a little sceptic about the Lake Emfotte. Andre said it is also one of the uniqueness that Sentani land offers because the lake is shaped like a heart. That is why it is often called Danau Love, Danau Cinta, Telaga Cinta and or Telaga Hati (Danau and Telaga means lake, Cinta: love, hati: heart). Well, although in doubt, I still want to see the place

We went through a winding hill ­­road part of the Cycloops Mountain range by the Lake Sentani. Once in a while we were mesmerized by its exotic landscape. We stopped the car and took some photographs. We wanted to share to people about how majestic the lake is. Then we continued the travel again.  Our car passed through jungles- a rich vegetation in the area of Sentani that is so green and healthy. The road was nice and quiet. Cars rarely passed by. It was just wonderful.
The Lake Sentani that couldn’t fit my lens because of how large it is
We met a crossroad, our driver and guide named Daniel Heri was confused on which road to take because going to the Lake Emfotte still has minim signs and it is still considered a rare place to go. Our car was the first one in line. So, we stopped and asked the locals. Then, after it seems that Heri had enough directions, we moved on.
Somehow at that time, we didn’t realised that there was one of our friend’s car that was separated from us. It was also a little bit hard to keep on track with the others at our back. So, while Heri drives, he also gives direction to the other car by phone.
About nearly 2 hours of travelling including the stops for landscape pictures, we finally arrived at Danau Love in Emfotte Village.

The White Road that adds up to the beauty of Emfotte

I hopped off the car, to see the lake. Standing on the land in 40 degrees angle seems hard to see the so called Lake Heart. Oh well, I said it’s okay because the scenery was amazingly elegant! The lake was surrounded by rolling hills of fresh green grass until the farthest of my eye sight could see. Savannah!
The area was beautifully spacious within the silence. I saw some flying flock of birds in the sky, flying towards a group of trees, it was hard to tell because of the distance but I could see some colours like red and green feathers. I was guessing from the way they fly it would be the lorikeets. Also, I figured there was also a flying eagle too.
I love allowing myself to see the outstanding beautiful natural features such as this. In a tranquillity zone and in touch with nature. Nothing is as luxurious then this. I imagine myself lying down on the savannah and let the earth energy cleanse mine. Inhaling deeply the uncontaminated air, just being in one with the surrounding nature. I felt in a different place, a different land, a different dimension. My visionary land, my utopia. It gives you that kind of feeling when you listen to your favourite music that makes you go into a different dimension and let yourself soak in it. I felt like playing my favourite album by Enigma at that time and synchronised the utopia in my head, my favourite music and the magical nature around me.  Heaven!
Well, I took a picture of the Lake Emfotte with a content feeling. And guess what! There was a heart shaped lake beautifully appeared at my camera screen.  It does look like a heart. I took a lot of pictures to capture the heart in a great angle possible. It was around 1.30pm when we realised that our friend’s car hasn’t arrived yet. It was hard for us to reach them because of no mobile signal. Instead, we waited. 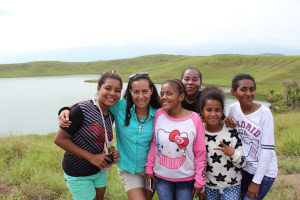 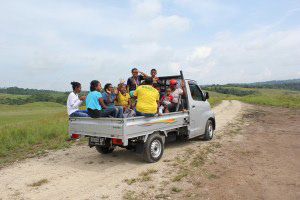 There was a friendly local family in a pick-up car enjoying the site. I came and said hello to them. After they felt enough of enjoying the lake, they went home to Jayapura City. We took pictures before they left and said good bye while waving our hands. Then me and my travelling friends took pictures together, shared stories, our guide friends shared several mob stories (a typical Papuan funny stories), we kept in silence for a little while, walked around the lake and we repeat the same thing again until it was around 3 pm. We got worried. One car came back after they tried to pick up the lost car but came with no result. So, we decided to jump in the car and look for them on the way home. They shouldn’t be too far I thought.
Once we found a curve road of muddy track, we have thought that they might have gone through it. Several friends had checked by trekking it but again with no result at all. Someone had finally found a signal and reconnected with the lost car when they came back.  So we return towards the Lake Emfotte, just before it there was an iron bridge just around a curve at the left side while the Lake Emfotte is heading at the right side from the curve. Actually there was a sign showing the direction of Lake Emfotte but sadly it was small and in poor visibility. We received an information that the car was stuck in a muddy road somewhere- the more the car tires try to save the car, the more it got stuck. They tried many ways to help the tire go out from the mud but it was hard with lack of tools.
We parked the car on the iron bridge and some went out of the car to stretch their arms and legs. I was still in the car with my friends when Heri said we are going to pick up our friends that were lost. We were already making ourselves comfortable inside the car and was too lazy to go out but Heri said it will fit everybody in later anyways, so we went off to the location while others stayed at the bridge. I was actually curious about it too. So, I didn’t mind.
It looks like a path rather than a road when we drove through it because plants were nearly covering it. We wondered why did they had to pick up this road. Some path were wet and muddy but Heri drove it carefully. A couple minutes later we were out in an open space, something similar with the nature at Lake Emfotte except we could see more lush rolling hills of savannah and a living forest below in between hills, serene atmosphere with lovely gold ray of sunlight glowing around us. It was incredibly amazing. I could be here forever!

5 minutes later we saw Andre walking alone all sweaty and panting. We felt relieved.  Then he immediately jump in the front sit and instructed Heri the way. Well, there’s no other way else but the location was still far. We hurried until we met our friends sitting and lying on the ground, some taking pictures waiting for help.  The car was nowhere to be seen and they said it was still further down where there were a lot of insects inside a forest. So, they decided to walk until an open space to where we had found them. We were all happy to found each other but I also cannot resist to take pictures of the lovely scenery.
We went back inside the car all jammed together until we reached the iron bridge. Now, everyone is relieved except one driver who still had to take care of the car with stuck tires and wait patiently for help. Andre and Heri arranged a help for him and the car. So, we had return back to the Lake Emfotte so that our lost friends could enjoy and take pictures about it and we parked our car on top of a hill and the heart shape lake was visible from our point of view. Everybody was happy. There were some locals who also enjoyed the lake at that time too. The area was definitely clean, neat and breath-taking. Thank you God for creating such a lovely scenery.
PS.
To know more about Sentani, Lake Sentani and Lake Sentani Festival please have a look at the following link http://www.indonesia.travel/
↑Back to Top